Behind the Wheel Class

After registering, please contact us at (276) 644-1845 to schedule times. NOTE: Behind the Wheel lessons will not be administered unless you have completed the classroom knowledge portion. You will need to show proof you have completed and passed with a private or high school transcript. Otherwise, you will be required to participate in our entire Driver Education program.

A formal class that prepares a new driver to obtain a learner's permit or driver's license. Topics of instruction include traffic code or laws and vehicle operation. Instruction will warn of dangerous conditions in driving such as road conditions, driver impairments, and hazardous weather. Instructional videos will be shown, demonstrating proper driving strategies and the consequences for not observing the rules. 36 sessions in the classroom and 14 sessions In-Car. Call 276-644-1845 for class times.

Students under age 19, If you have failed the learner's permit test three times, you are required to take this 36 session course. However, students under age 19 can provide proof they have satisfactorily completed a Virginia approved driver education course consisting of 36-50 minute sessions of classroom to be eligible to take the "Manual Class". Please bring your DEC-1 Card from your Virginia high school. If you failed the learner's permit or renewal test three times and you are under 19 years old, and can not show proof of taking a driver education class you are required by the Virginia DMV to take a Re-Examination Class. Register today!

Classroom instruction for all ages, If you have failed the learner's permit test three times, you are required to take this 36 session course. However, students under age 19 must provide proof they have satisfactorily completed a Virginia approved driver education course consisting of 36-50 minute sessions of classroom before taking the "Manual Class". Please bring your DEC-1 Card from your Virginia high school. Register today!

Daniel Taylor, a traffic-operations specialist at the Virginia Department of Transportation, was lying in bed at home one night in March, jotting down ideas for highway safety signs.

Inspiration struck. Why not use the “Black Panther” movie to nag drivers? Days later, 120 large electronic billboards along major Virginia interstates beamed the bulletin: “Wakanda Driver are You? Safety is King.” 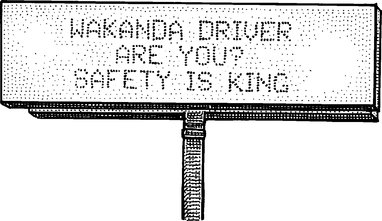 Mr. Taylor says the agency did have to turn off the message—which refers to the imaginary kingdom in the movie—in one spot because drivers were slowing to look at it but that otherwise it was a hit.

“I was just excited,” he says of his most attention-getting foray into the genre of roadway repartee. He followed with “You’re not a firework. Don’t drive lit” on the Fourth of July and “Seatbelt sings: Don’t you forget about me,” inspired by the band Simple Minds, in August.

As summer car travelers are noticing, state transportation officials have become a bit of a trip. Traffic specialists who once stuck to dispatches like “Westbound I-70 left lane closed at Wentzville Parkway” are spicing up electronic billboards with snark, dad jokes and the occasional eyebrow-raiser.

The Missouri Department of Transportation featured “Hit the road, Jack… Don’t text back no more” on digital billboards this summer. Maine went with “Spend money on lobstahs, not speeding tickets.”

Drivers find it “out of the ordinary for a department of transportation to have a personality,” says Lisa Miller, the Utah DOT traveler information manager. That agency “caused quite a stir,” she says, with one of its highway messages, “Get your head out of your apps.”

Utah now steers toward tamer, locally relevant messages like one this month: “Gambling is illegal in Utah. Buckle up.”

In Boston, Dan Berlin was enduring his daily commute to his job as a vice president of a customer-experience research firm in July when he stumbled across an obscure drive-time comedian: the Massachusetts Department of Transportation.

“The person writing the MassDOT electronic signs….deserves a raise,” Mr. Berlin, who is 41, wrote in a Twitter post in July. “The messages are short, eye-catching but not distracting, and pretty funny.”

An agency spokesman said the signs are “collaborative efforts.”

At the time, transportation agencies typically used digital billboards to convey real-time traffic information or to participate in national safety initiatives like the “Click It or Ticket” campaign. 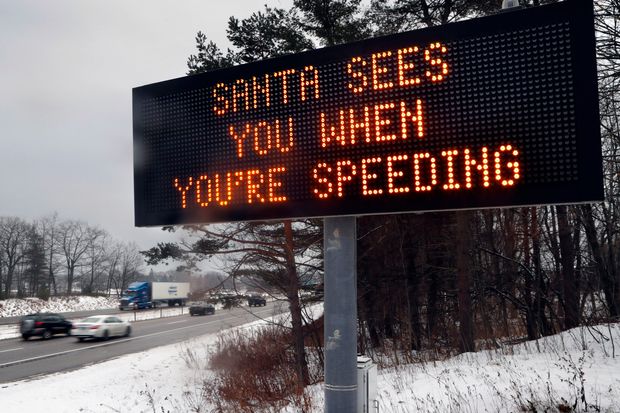 A warning from the Maine Department of Transportation. Photo: Robert F. Bukaty/Associated Press

An Iowa official wanted to put out regular public-safety messages when the electronic billboards might otherwise be dark, and assigned veteran traffic and safety engineer Willy Sorenson to the project.

“It actually hit me in the shower,” Mr. Sorenson says. “Let’s do ‘Message Mondays.’”

Early messages were on the gentle side—“Santa’s coming. Have you been a good driver?”

Then Mr. Sorenson and his colleague Tracey Bramble, an information specialist, got cheeky with messages like “Have some class. Stay off my bumper” and “Did you run out of blinker fluid?”

The duo hunkers down in a conference room in Ames every six months to brainstorm on slogans that appear weekly on 80 electronic signs.

“Tracey brings chocolates and when we come up with good ones we can have a Hershey’s mini bar,” Mr. Sorenson says.

Their ideas are pitched to and approved by a subcommittee of engineers and others who make sure the slogan isn’t too aggressive—“Deck the halls, not the guy who cut you off” got a lot of debate before approval—or so subtle that no one gets it.

“I don’t always get the ones tied to a Taylor Swift song or other pop culture,” he says. “I get lost on those.”

Iowa, which doesn’t repeat messages and typically uses them for 24 hours, gives away its lists of slogans to other states. Artist credit gets murky. One well-circulated message is the “Get your head out of your apps” one.

“Everybody thinks they came up with it,” Mr. Sorenson says. “It was from a 14-year-old in Cedar Rapids. He told his dad. His dad contacted me.”

It helps that transportation officials tasked with writing the electronic billboard messages have recently started a dedicated “share site” on Facebook to trade ideas, says Sam Cole, the traffic safety communications manager for the Colorado Department of Transportation.

He recently borrowed “Who ya gonna call? Nobody—You’re driving” from other states.

In a survey sponsored by the Federal Highway Administration, respondents said roadside safety messages—the study looked at more straightforward messages in four urban areas— would be more likely to change their behavior than messages from other media.

States say the humorous signs spark conversation. Missouri recently asked the public to submit ideas. “Don’t be a tool, buckle up fool,” says Taylor Brune, a spokeswoman for the Missouri DOT, was one entry that didn’t work. “That was an obvious no for us.” 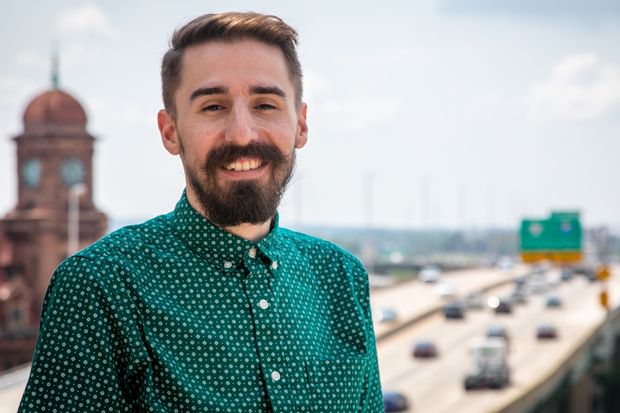 In Virginia, Mr. Taylor, the traffic-operations specialist at the agency, says he has received so many good ideas that he now has an online “sign library.”